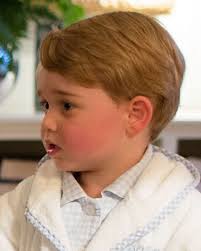 Like many others viewing your third birthday photos, I chuckled. Thought how terribly cute you are – and wondered what the future will bring. What lovely snapshots of a child enjoying special moments with their family!

However some people are apparently up in arms about these photos. Particularly the one of you sharing your ice cream cone with your dog, Lupo.

According to an article*  published on Yahoo, animal cruelty campaigners are tweeting their dire displeasure about the photo. The jist of their “wisdom”  is – never, never, never feed a dog ice cream – and they are using your photo to ram home their point.

I hope not. I share the goal of wanting to make sure pets are fed healthy foods.

However a practical side of me is musing. What was the world like before the advent of animal food companies.  How ever did  pets survive for thousands of years on what is basically “people” food mixed with whatever prey they might catch for themselves?

We tend to forget that fact in the furor to eat healthy foods – and to provide same to our four-legged friends. We want their companionship with us for as long as possible.

But I think that sharing one’s ice cream cone – provided it’s not chocolate – with the family pet during a special occasion can be seen as just that.

A happy moment where a little boy and dog bond over ice cream!

And perhaps the rest of us who aren’t George’s mummy and daddy — you know, the one’s who are responsible for bringing up George — can simply smile and wish this little boy all the best!

The verdict on Hillary Clinton’s use of a personal server for her Secretary of State communications is in. Earlier this week FBI Director James Comey issued a detailed assessment of why charges will not be forthcoming — despite Clinton’s being “extremely careless.”

Sobering words those. “Extremely careless.” Appropriately said? However one might wonder if that is part of Comey’s job description, to offer opinions?

Politico published a story about Hillary Clinton’s mixed blessings — and President Obama going the extra mile to stump for his one time rival at a Tuesday meeting in Charlotte, NC.

The AP Fact Check (that appeared in the Kansas City Star and elsewhere) examines Clinton’s past claims about not sending any classified material on her personal server — versus “The Facts: Actually, the FBI identified at least 113 emails that passed through her personal server and contained materials that were classified at the time they were sent . . . .”

Clinton, herself, appears to have nothing to say on the subject — something that one might find troubling in a potential future president. USA Today quoted Clinton’s campaign spokesman Brian Fallon as saying they were glad the matter was “now resolved.”

Resolved? But is it? Will voters care about this issue come November? Clinton has enormous political experience as a former Secretary of State and First Lady. Still ….

The New York Times Opinion page editorial board published an editorial that ended with:

“If there was ever a time that Mrs. Clinton needed to demonstrate that she understands the forthrightness demanded of those who hold the nation’s highest office, this is that moment.”